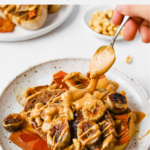 This Vegan Elvis French Toast is a tribute to Elvis Presley and his favorite food – a fried peanut butter, banana, and bacon sandwich. I Can’t Help Falling In Love with this surprisingly delicious breakfast recipe!

The day I am sharing this recipe is January 8th, 2021. You know what that means? By the title of this blog post, you can probably guess that it is Elvis’s birthday today! Happy birthday to Elvis Presley! Elvis was born on January 8th 1935, which means he would have been turning 86 this year. Although Elvis unfortunately died in 1977, he was a huge influence in American pop culture and his legacy will live on forever.

To celebrate The King, I’m making a veganized french toast version of his favorite meal, which is a a fried peanut butter, banana, and bacon sandwich. At first I thought this combo might be weird, but it is surprisingly really good! It’s sweet, salty, crispy, nutty – everything. Don’t sleep on this Elvis French Toast recipe.

First, cook the vegan bacon according to package instructions. I used Lightlife vegan bacon and highly recommend it! It’s crispy and delicious. I also have a tempeh bacon recipe on my blog, if you’d like to make your own. It is not as crispy, but it is sweet, smoky, and would make the King proud.

Once the bacon is done cooking, remove from heat and set aside.

In the same pan, melt some vegan butter or oil. Cook the banana slices on each side until caramelized. Remove from heat and set aside. You’ll be using this same pan for cooking the french toast.

How to make Vegan French Toast

If you just wanted to make regular vegan french toast and not Elvis French Toast, you could just do these next few steps. In a wide, shallow bowl or dish large enough to hold a slice of bread, whisk together the milk, maple syrup, vanilla, cinnamon, corn starch, and baking powder. Soak each side of the bread for 20-30 seconds, until evenly moistened. If your bread is thinner, you might not need to soak it as long. Once both sides of the bread are soaked, fry on each side for 2 minutes, or until golden brown.

To assemble the Elvis french toast, place a piece of french toast on a plate, top with some bacon slices, caramelized bananas, maple syrup, a drizzle of peanut butter, and peanuts. To make the peanut butter easier to drizzle, you can microwave it in 10 second intervals, stirring it until it’s smooth and runny.

I think my favorite Elvis song is Can’t Help Falling In Love. I’m a sucker for soft and sweet love ballads. I used to take voice lessons when I was younger, and my voice teacher first introduced me to the song. It was her idea to try it out, and it really suited me and my voice. It’ll always hold a special place in my heart.

My second favorite song is definitely Suspicious Minds, but I also love All Shook Up, In The Ghetto, Stuck On You… and most of his songs, actually.

What is your favorite Elvis song? Let me know in the comments below!

I hope you make this Elvis inspired recipe! This Elvis French Toast will be my annual Elvis birthday celebratory breakfast, but I may just have to whip it up more frequently throughout the year because this odd combo is actually quite delicious. I guess Elvis had good taste.

This Vegan Elvis French Toast is a tribute to Elvis Presley and his favorite food – a fried peanut butter, banana, and bacon sandwich. I Can’t Help Falling In Love with this surprisingly delicious breakfast recipe! 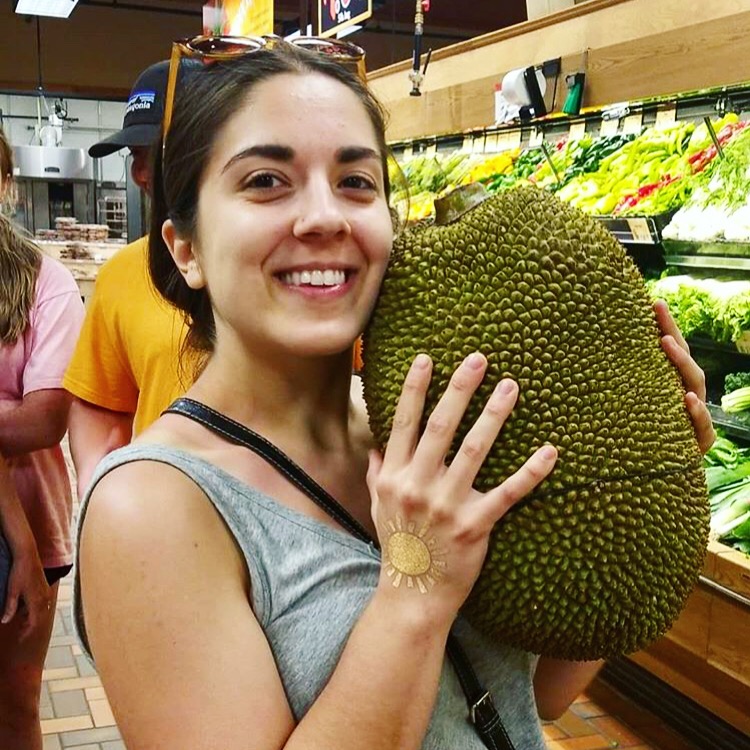 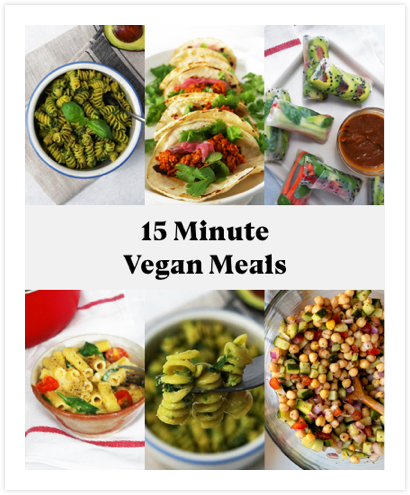